Conferences in Cambridgeshire & Hertfordshire break the silence on domestic abuse 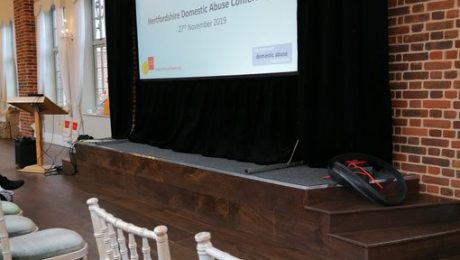 Domestic Abuse is usually something that people find hard to talk about. This didn’t seem to be the case at the Cambridge City Council and Hertfordshire County Council events this week. The rooms at the Guildhall and the Offley Place Hotel respectively were packed to the rafters with professionals from all areas of business, local councils, private and public sector. The most powerful thing and possibly surprising to those who do not work in the domestic abuse sector is among the attendees were indeed men. After all 40% of men are affected by domestic abuse and it can be argued that domestic abuse cannot be completely eradicated without the support of men and women alike.

Lots of buzz in the room as we prepare for the #HertsDA19 conference today! Looking forward to sharing knowledge and expertise and hearing from some great speakers @JoanneBeverley6 @ACR_Trust pic.twitter.com/DQDLYmDQfO

Among those men attending the Cambridgeshire City Council event, four of them from different areas of business, were White Ribbon Ambassadors. Again this is hopefully a sign of the times that women will no longer be fighting the fight against domestic abuse alone. Also a surprising feature of the Hertfordshire County Council event is that a portion of the conference was dedicated to domestic abuse in the LGBT+ community. If domestic abuse is an area that not a lot of people talk about, a lot less is spent talking about abuse in LGBT+ relationships and it is encouraging that not only is it being included in the conference, it had its own workshop given by a representative from Galop, which is an LGBT+ anti violence charity.

Attending both conferences is a sure sign that not only is there more conversation about domestic abuse awareness and prevention, but that this conversation is reaching all corners of domestic abuse as a whole. There is more understanding of not only different types of abuse,
whether financial abuse, coercive control, or sexual abuse and who it affects, and how we can tailor support, guidance and legal help to them.

Just about to hear Dr Jasna Magic talk about #domesticabuse in the LGBT+ community #hertsda19 //t.co/0xt72Er05v